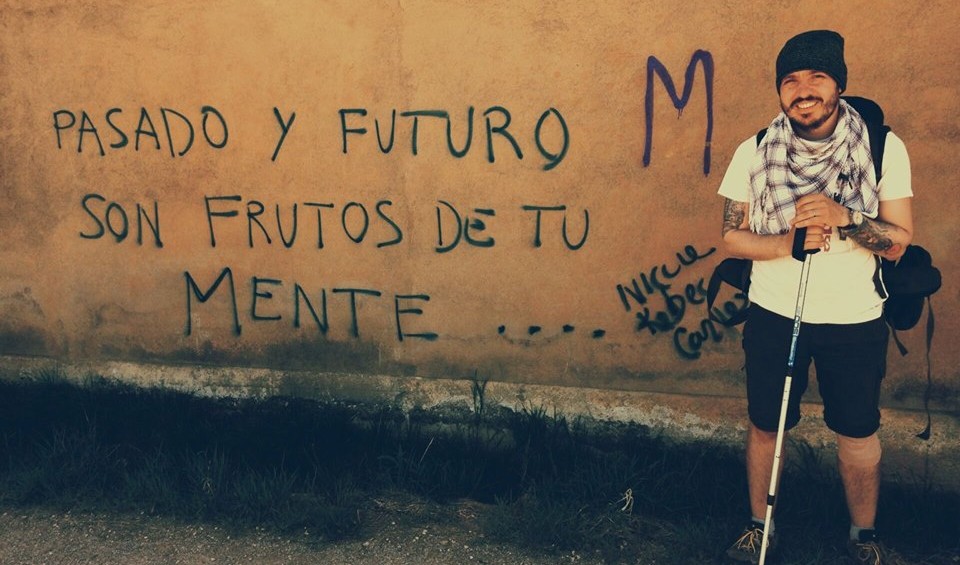 Mihai Baciu is a soft skills trainer with 12 years of experience. Together with his wife,he has recently completed the 500km trip, El Camino de Santiago, the famous pilgrimage route littered with legends, spirituality, astonishing views and perplexity. Throughout those 16 days, Mihai travelled about 34 kilometres a day, guided by the famous scallop shells – symbols of the route – signifying that all roads converge to one single point of self-awareness at the end of the journey.

He has successfully completed his mission and proved that people can be the best role models for other people.

Trainart: What do you think pilgrimage represents nowadays?

M.B: I think it is very different that what pilgrimage used to be years ago, there’s no doubt about that. I am referring to the fact that the pilgrims are not the same anymore and their goals are also different. Their activity is no longer connected to religion.

Trainart: Where did this impressive success come from? For some people it may seem some sort of fairytale.

M.B.: My wife, Raluca, came up with the idea. Three years ago she heard about the route and she said she would like us to go on that trip. Initially I didn’t understand what it was really about and I said ”Sure, I’m in! Why not?”. I’m always up for something …out of the ordinary. I even bought flight tickets but, due to some work issues, we had to cancel 4 months before the trip, so we put the project on the back burner. This year we said it was a good time to get things started again. We bought the tickets and everything just fell into place. We didn’t know what we were getting ourselves into, we only realised that after the first three days. So, this is how it all started; it was her idea which I took and made it happen. That’s how it usually happens: somebody comes up with something and I like to implement it. 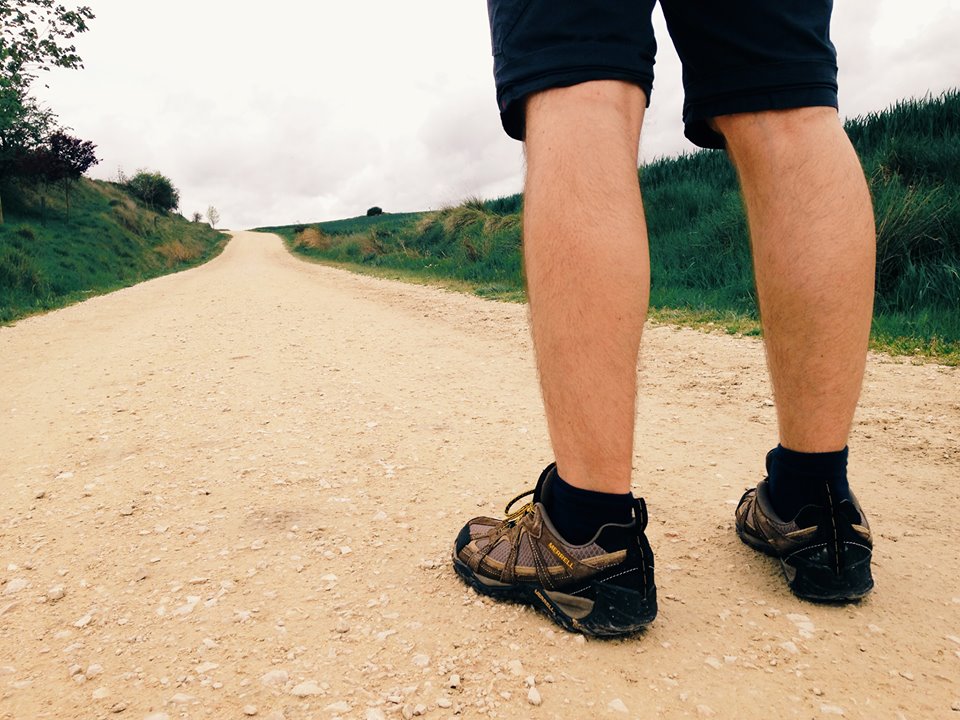 Trainart: Had you ever had similar experiences before this trip?

M.B.: I can’t say I had any special training. I ride my bike a lot and I’ve done some trekking in the past. But I honestly can’t say I prepared in any way for this trip.

Trainart: Which were the main difficulties you had to overcome?

M.B.: The hardest moment was in the fifth day when my wife just couldn’t go on because of the pain in her left knee. We had to choose between both travelling by train to the next city or me marching on by myself. She took the train to Leon, trying to recover and I walked the remaining 37 kilometres. When you walk alone, the experience changes, it becomes much more personal. It is interesting how, after a certain number of kilometres, the trip is no longer exterior, it is an inner one. 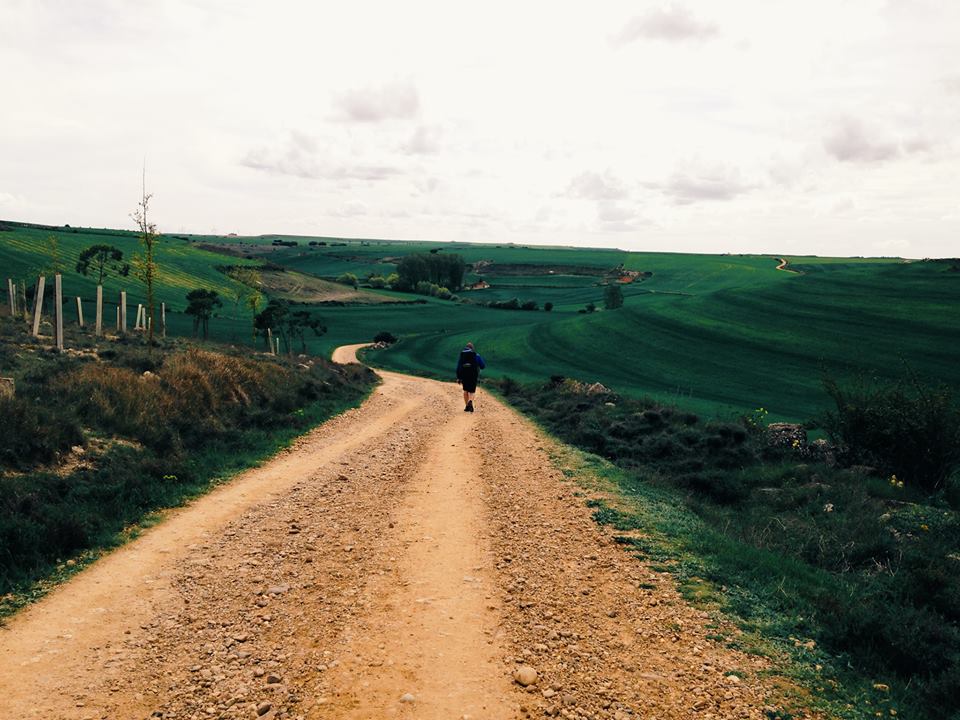 Trainart: How was the trip, what kind of accommodation could you find?

M.B.: You could choose to stay in a private albergue, or in an albergue belonging to the City Hall, or you could stay at a church. When we stayed with nuns I was surprised to see they had Wi-Fi, washing machines, practically, they had everything we needed. As to the road itself, it isn’t wild, it is very well organized. There were place where you didn’t need to pay, everything was done through donations. It’s true, there were areas where the phone signal was poor, or there was no Internet access, but once we arrived in a village or in a bigger town we had easy access to this kind of technology.

In what food was concerned, it was plentiful and seemed especially prepared for pilgrims. We would have tortillas in the morning, which is some kind of potato omelette, with bread. There were also three course menus for pilgrims, for about €10, which also included a bottle of wine for each person, to sleep well.

Trainart: It is said that pilgrims learn to keep only the things they need and to appreciate simple things. Which were the most useful things in your backpack?

M.B.: I’ll start with the socks. I had three pairs of socks on me, two t-shirts and two pairs of trousers. The luggage you have shouldn’t exceed 10% of your body weight. We gave the tent up after three days, as we realised there were places we could stay in and there was no need to carry all that extra weight. There is a service which allows you to send your things to a destination along the way or to the final destination. It was a good decision to use it, because in these cases even a kilo can make a difference.

Yes, you can live on very little. You don’t need many things to be happy. 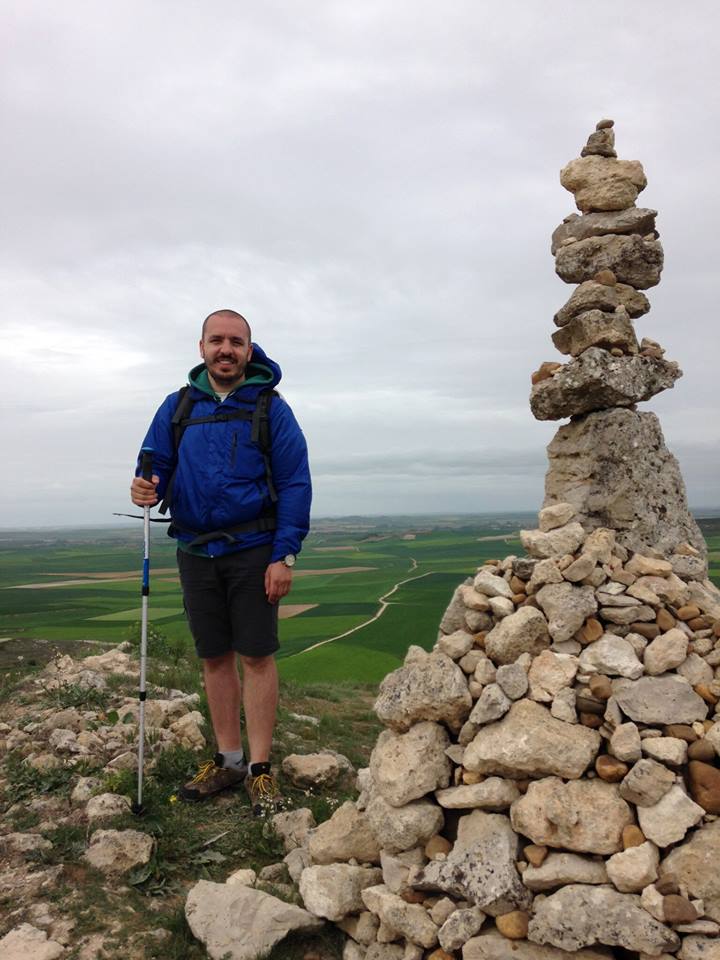 Trainart: This route attracts over 150.000 pilgrims and almost 3 million tourists. What kind of people did you meet on the way?

M.B.: Of course, there is this incredible multicultural force and we met a lot of wonderful people. One of them was a 72 year old American –a former helicopter pilot in Vietnam, retired. My wife asked him why he had decided to take the trip now, and not sooner. He said, and I remember his answer well: `Because I considered that I wasn’t mature enough so I waited to turn 70. Otherwise I wouldn’t have understood anything from this journey.` I thought that was incredible.

We met people we became friends with. Maria from Venezuela who worked for HBO South America and two other girls from Germany who were travelling alone, Silke and Jessica. Jessica, a strong woman, who had practices sports, took part in all sorts of events. When we first met her we asked her if she had corns, because this was the main ice-breaker there. She said no, but by the end of the trip she had a blister on her foot as big as a coffee cup and we `operated` on her in the evening and sterilized it. The next day she had a swollen knee and we all thought she wouldn’t be able to go any further but she toughened up. On the last day I was actually wondering what else might happen to Jessica, what other sign the Universe would send her to prove to her that she wasn’t as strong as she thought. In the morning, Jessica showed up, her eye swollen. She had been bitten by a spider.

I learned something from every person I met.

Trainart: This trip is thought to be a journey for the body and soul. Which were some of the most important lessons for you?

M.B.: When I came back I was much more relaxed about the pressure I used to put on myself, when it came to my professional goals, but not only. I realized that things may come naturally if you act naturally and if you are honest with yourself. Another lesson I’ve learned is that I can live on very little and that I don’t need huge amounts of money to be happy. I have rearranged my values.

I also have a different take on walking now. I avoid driving or taking the metro, as much as possible, and I walk or ride my bike instead. There, life had a different pace; I could see the wheat ear growing. You also feel the people, places, the interaction, in a different way. There is an option to travel the Camino by bicycle, but I wouldn’t do that, I’d still walk. Besides, after this trip, I made new friends, wonderful people with interesting stories.

I even received a message from the Universe one night. I went to bed and there were  bunk beds; I took the lower one, and above my head, on the wooden bars, there were all kinds of messages left by the pilgrims who had previously been there and one of them read: `True happiness is only when you share it with others`. This encouraged me to post photos and travel stories for those back home every day. 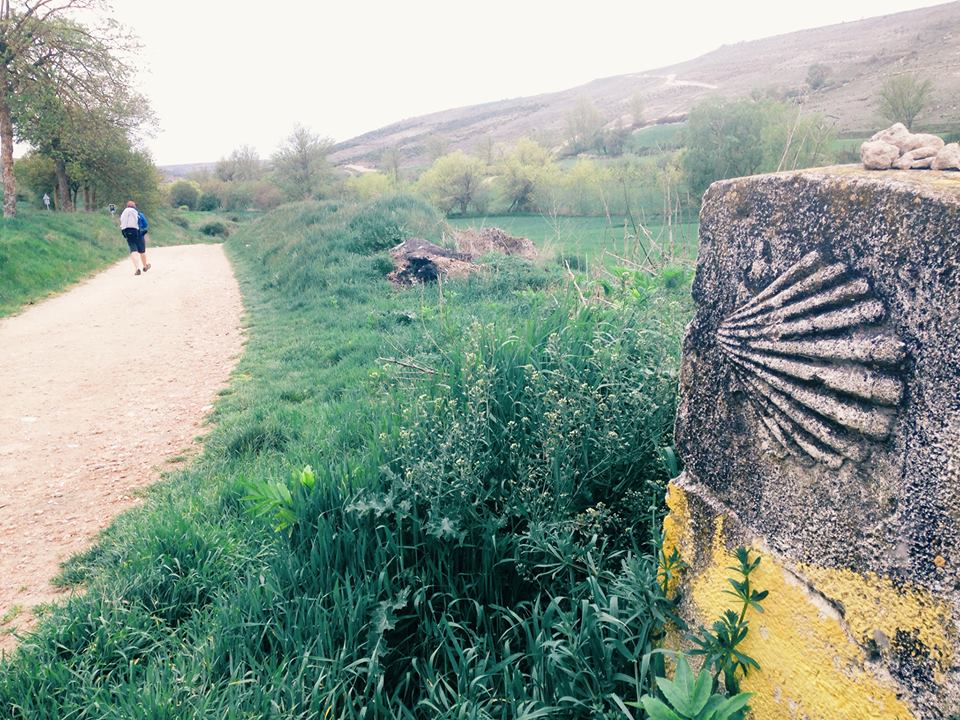 Trainart: Was there any part of the trip which you particularly enjoyed?

M.B.: All of them. I know this sounds as a cliché, but it really was all of them. Every day it seemed to me I was in a different country. For example, there were times when I was passing through mountains areas with cows and stone houses which looked like farms and I felt I was in Austria. Other areas resembled Italy, Tuscany, with lots of vineyards. Every day was different and every day I thought about what would happen next, what I could see differently the next day. The road surprised me every day. Besides, the beauty is in the eye of the beholder.

I know that from Santiago you can walk farther to the ocean, to Finisterre, `the end of the world`. There were people who continued the journey and there is an old legend saying that once you get there, you must burn the things you had with you, in order to mark the road you’ve completed. There is another place where you can throw the stone you carried with you throughout the trip to symbolize leaving your worries behind.

Trainart: Do you have any plans for a future trip or do you think one such experience is enough?

M.B: I am preparing for another trip, but I’d rather not talk about it yet. I’ll tell you more after I will have finished it. All I can say now is that it takes more training and it is longer. 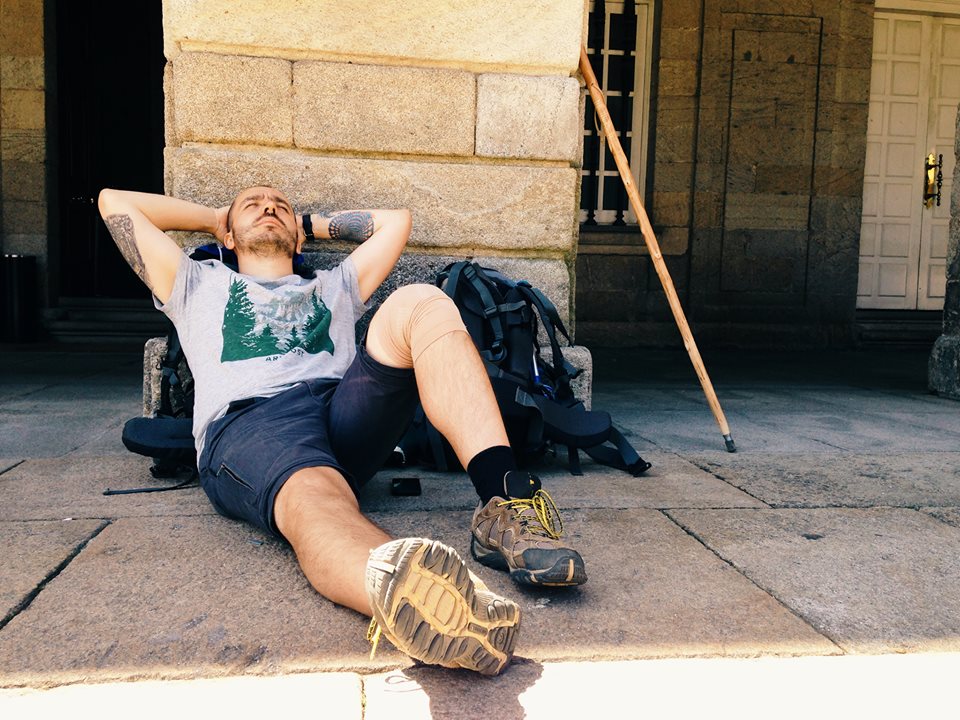 Trainart: What advice do you offer to those who are thinking about walking El Camino de Santiago?

M.B.: Just buy a plane ticket and go! Nothing else. The more questions you ask yourself, the more doubts you’ll have. For us, time was a problem. So, if there is any advice I could give, it would be this: take as much time as you can. I recommend this experience for those who want to think more about themselves, who want to discover themselves and I would recommend not going in a group. No more than 2 people.

I found it strange that there are people who only came for that final stamp,which you got in Santiago.  And in order to get that stamp you only needed to walk the last 100 km and there were people coming by bus, and only walked for 10 km a day. The bus would come and pick them up, leave them at the hotel, and then take them back. This was not an authentic experience, they had no backpack, they were travelling in groups and if you are in a group, you can’t feel the same way about the trip.

Having travelled a sacred way, full of curiosity and open-minded, Mihai came to his own conclusions, brought back his own stories and adventures which will inspire many of those who know him. 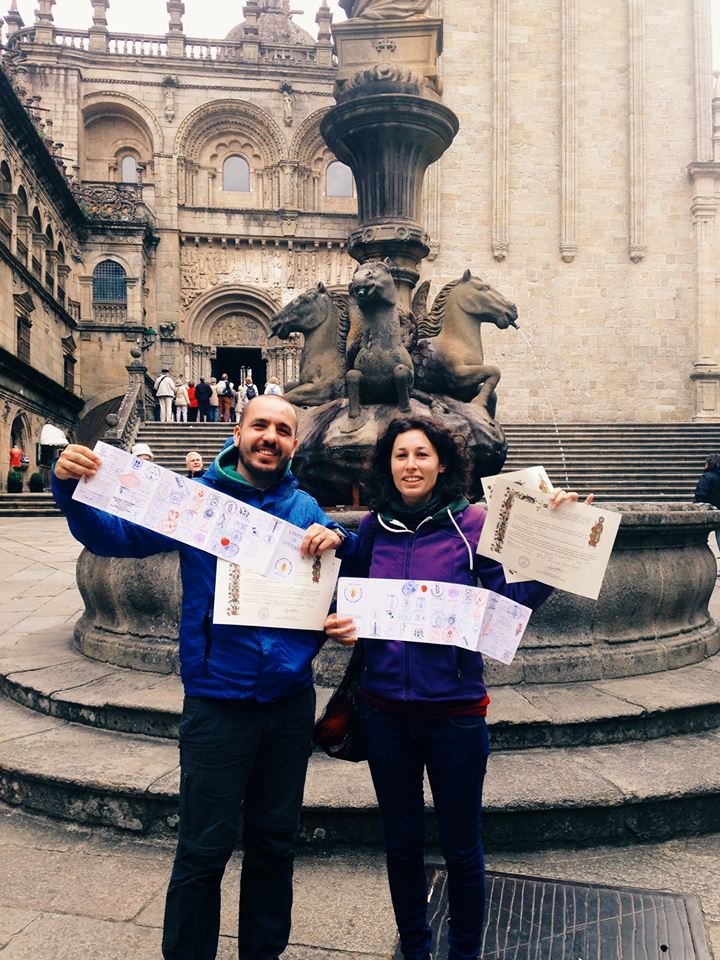 Alice Tirsea – I’m fascinated by the diversity of people and the way in which a situation can be viewed from so many perspectives
Alice Tirsea is Managing Director for UCMS Group Romania, a multinational company which offers payroll, staff management and accounting. Alice is one of the women who are...
END_OF_DOCUMENT_TOKEN_TO_BE_REPLACED

Gina Calagiu – If we do not want life to just pass us by and to create it, we need to be constantly aware and consistent
Gina Calagiu is an entrepreneur and strategic consultant with over 20 years of experience, during which she not only built a solid portfolio of clients from various...
END_OF_DOCUMENT_TOKEN_TO_BE_REPLACED

CONTEST: Adela Ene – I step out of my comfort zone every day and I like that, I found out a lot of interesting things about me
A part of our contest consists of interviews with the registered people. Participants must go through 3 sets of questions (Career, ERS and Creative Innovation) to demonstrate...
END_OF_DOCUMENT_TOKEN_TO_BE_REPLACED
This site uses cookies for a better user experience. By continuing you agree with your use of cookies. Fond out more about cookies Close